Go to the master post
Brave is a hack of Ben Milton's Knave, an old-school adventure game toolkit without classes and a lot more emphasis on equipment. The earliest changes I made were miscellaneous tweaks and houserules I added as I would run Knave, but at this point I've bolted on several advanced play procedures. While Knave is optimized for a DIY "rulings over rules" style of play, I still felt it was valuable to write down many of those rulings that I've made over the years and codify them. One of the best parts of the original Knave were the designer's notes, but I've taken them out because I needed to make room for new stuff and I assume that anyone playing my game would already be familiar with the original version anyway. Instead, you get my blog.
These notes are written for version 1.9, which you can find on the sidebar of this blog or by clicking here. 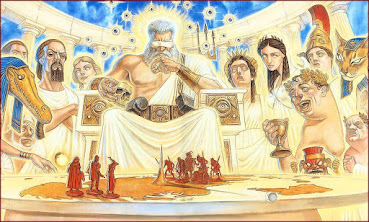 Alignment
Alright I already know this one is going to be a doozy, but hear me out.
A lot of people hate alignment and never want to see it used in any fashion whatsoever. Good for them, I won't get in the way.
Other people have more interesting opinions where they're willing to engage in topics like morality and ethics. I love that stuff but I do recognize that it's not easy to build into the gameplay. Then you get the more old-school interpretation which tends to be more political and factional. In the Elric saga they have lords of Law and Chaos as deities, and in Three Hearts and Three Lions they're, like, the two halves of the world. Likewise in OD&D it seems to be a society thing, and in games like Lamentations of the Flame Princess or Dungeon Crawl Classics it's more of a cosmic thing. And then you get people who do something completely different from Law and Chaos or Good and Evil, instead using ideas like "The Elements" or "The 5 Magic Colors" or "Colonial/Native" or something as alignments. There's this popular LotFP hack which encodes alignment into the magic system. It modifies the saving throw list to now include "Law saves" and "Chaos saves," used for saves again Cleric spells and Magic-User spells, respectively.
Aren't those all fascinating? Don't they just make fantasy more interesting and creative? I like all of those ideas and I want to acknowledge the validity and potential in each of them. So I've done that in a way that I think most people can look at and say, "well gee, that doesn't sound like a terrible game element at all. That's just cool worldbuilding you can play with." Maybe the referee reading about "societal alignment" will get some ideas about a cool settlement they'll create for their players, because they can design it to fit the description of a "chaotic society" specifically. Maybe the players reading about "cosmic alignment" will get some ideas of which immortals they should pray to and who they should fight against if they want to gain favor with the right gods.
That said, it's worth noting that I took the more unconventional approach of making Neutrality its own faction, rather than merely being "not Law and not Chaos." That meant I had the challenge of figuring out a distinct identity for it and sometimes stealing from things which would have traditionally been attached to Law or Chaos instead. Something that helped was defining an "enemy" for Neutrality specifically, so that it could have its own rival just like Law and Chaos are for each other.
Another interesting part of the worldbuilding here is that there's no assumption whatsoever that PCs fight for the forces of good. I've seen a lot of RPGs that use Law vs Chaos but then explicitly say that, "the players are on the side of Law, the enemies are on the side of Chaos." I have no problem with that, and I think it's a decent paradigm to follow. But this is Knave baby. The PCs are rascals and ne'er-do-wells. They're cutthroats and murder hobos. Sure, some of them will fight for Law. But about an equal amount will fight for Chaos! I sincerely mean it when I say that, for the implied setting of this game and the way I usually run it, the players are equally likely to find themselves fighting angels and saints as they are demons and undead. And naturally, Neutrality is simply the third piece of the pie, which could just as easily be their ally or their enemy as well.
If you're interested, in my post "People, Power, and Land" I explore the idea of using "societal alignment" to inform random encounter lists and different zones of control in a hexcrawl, which is an idea I'll be building on later. 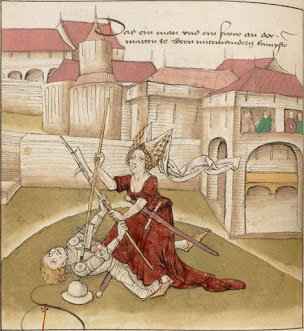 Combat
This doesn't have nearly as many changes as other parts of the game, but they show up here and there. The single biggest change is the Death and Injury system, which is a version of "Death and Dismemberment" adapted from Trollsmyth's version (James Brian Murphy), itself adapted from Robert Fisher’s. See, I like "death at 0 HP" just fine. I don't mind a lethal game and I do want my players to be cautious and methodical. I want them to have something to truly fear and I want there to be serious consequences for their mistakes. But after playing that way for awhile I just had to conclude that, yes, there is such a thing as "too punishing."
My players are not dumb. They're pretty dang good at this whole adventuring thing. I've never seen a TPK in more than a decade of gaming, largely because the people I play games with are usually quite smart. But if you have 1d8 HP and you die instantly at 0 HP, then even just one mistake will kill you. And sure, character creation is fast and easy (nobody's ever complained about that part), and this game doesn't take itself too seriously (we oftentimes laugh at death as one of the funniest parts of the game)... but the fact remains that a lot of players just don't want to die. It's not out of some perverse, new-school desire for "PC worship" and obsession over your precious little snowflake. It's a very valid thing to just not want your cool character to die after only two or three sessions of using them. It gets tiring and discouraging after awhile. And "git gud" only takes you so far. Mistakes are only human.
This is the concern that Death Saves are meant to address in 5E. My Death and Injury rules functionally accomplish the same thing (i.e. prolonging your lifespan), but in a different fashion. Death Saves are weird and meta and supposed to represent something like "your character's fate hanging in the balance" or whatever. They're also kind of boring because they just take you out of the fight, but without the relief that at least comes with straightforward death. It should be a nail-biting situation, but it's mostly just kinda lame.
Instead, Death and Injury lets you keep playing and participating in the fight, but the way you function gets slightly impaired. Counterintuitively, this doesn't seem to undermine the grittiness of the game at all. I find there to be an interesting psychological effect that takes place. See, while the Death and Injury chart functionally means that you actually have way more "HP" than the number of HP written on your character sheet, pretty much every player still always behaves as though they die at 0 HP. They still respond to that moment as though they just got killed, and they still consider the option of fleeing a battle once they're hovering just above 0 HP. And that's because the "Death and Injury" zone you enter after reaching 0 HP is a fucking terrifying place to occupy. Like, sure, if you keep getting lucky rolls then maybe you can last a few more rounds despite suffering more and more hits. But every hit against you could be your last, and even the ones that don't kill you are doing things like breaking your fucking leg. It somehow makes combat both 1) easier to survive, and 2) feel more gruesome and scary.
And you know what else I like about it? If you roll one of the results for something like "broken bone" or "broken limb" then you don't get to adventure for a few weeks. Not only does this encourage downtime to be a part of your game (which I think is valuable), but it can functionally serve as "temporary death" for your PC. Death is a great consequence for failure in D&D, but it does kind of suck that it's permanent. Well, what if you could just be dead for a session or two? Just like with normal death, the moment your PC rolls that injury, they're taken out of the fight and can't participate in the rest of the adventure. The player should roll up a new PC and introduce them as soon as possible. The only difference is that, a few sessions later, the player has the option of returning to their original PC if they want. They suffered severe enough consequences to be more careful next time.
Conclusion

I guess between alignment and death and dismemberment, this is the "filthy New School apologism" post. But I do like a lot of New School philosophy and I think I've done a good job not compromising the spirit of the game. Alignment was something I felt I should include directly in the core rulebook after flipping through 1974 OD&D and realizing just how important it seemed to them. And as for death and dismemberment, there kind of is no Brave without it. I found this one change to be the key to turning Knave from a one-off novelty and into something my friends would want to keep coming back to.