Brave 1.9: Tales of Sword and Sorcery 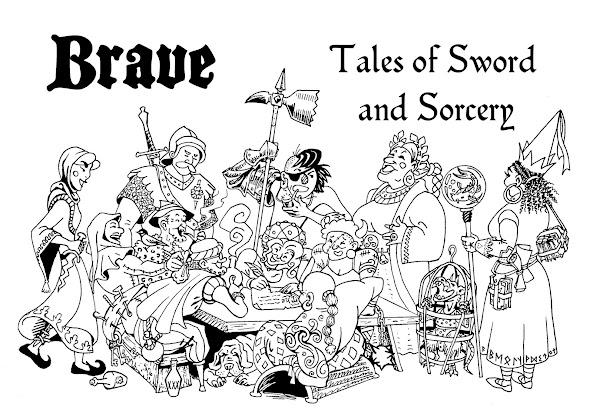 Click here to view version 1.9 of my RPG Brave. Here is the accompanying character sheet (it actually has 2 sheets on it since they're small), here is the dungeon control panel, here is the settlement sheet, here is the player version, and here is the village sheet. The total document is 19 pages including the cover art, which I recommend you print out (put the intro+table of contents on the inside front cover, facing the page that says "The Basics" as the header). This game uses the free fonts Garamond, Hamlet Tertia 18, and Black Castle MF. The cover illustration was done by me.
If you'd like the Word document to edit directly, you can find that here. You'll want to download those free fonts or else the formatting will be completely annihilated.
I have periodically updated the link on the side of this blog whenever several changes/additions accumulate, but I'm making a whole post about it this time because 1) this is the biggest single update to the game so far, and 2) it is (hopefully) the second-to-last update before the final version of the first core rulebook.
Why am I not waiting to post until the final update? Why isn't the title of this post "Brave 2.0: Electric Boogaloo"? At the end of this post, you'll see what content I haven't finished yet and I think you'll understand why that's going to take me a good amount of time. So no, my game isn't finished yet to my satisfaction, but it's finished enough to be a full game (more full than most old-school RPGs, even) and I just wanted to finally put it out there.
The rules probably speak for themselves just fine, but if you're interested in designer's notes then strap in. This whole week I'll be posting articles of design notes on each topic in the game, each pretty in-depth on my thinking and the intent behind each rule. Here's a list of what those posts will be covering, updated with links as they come out.
The rest of this post will explain the miscellaneous minor tweaks I made to Knave and then a list of the topics that are missing from this draft of the game (but are coming soon!).
Introduction

Brave is a hack of Ben Milton's Knave, an old-school adventure game toolkit without classes and a lot more emphasis on equipment. The earliest changes I made were miscellaneous tweaks and houserules I added as I would run Knave, but at this point I've bolted on several advanced play procedures. While Knave is optimized for a DIY "rulings over rules" style of play, I still felt it was valuable to write down many of those rulings that I've made over the years and codify them. One of the best parts of the original Knave were the designer's notes, but I've taken them out because I needed to make room for new stuff and I assume that anyone playing my game would already be familiar with the original version anyway. Instead, you get my blog.
Minor Tweaks

Most of my minor changes were to make the game ever-so-slightly more aligned with 5E D&D in largely meaningless ways. The reason is that I've been playing 5E every week for years and it's ingrained in my brain. I'd like the process of going back and forth between two systems to be fairly seamless, because those tiny differences that've been hammered into me have a surprising power to derail a session's flow. When 5E was brand new and I had just come from Pathfinder, it took me a long time to stop telling my players, "make a Reflex save."
Other tweaks not related to 5E D&D:
What's Missing?

The final version of Brave: Tales of Sword and Sorcery is going to have three more procedures in it. The first and most important one is a wilderness exploration procedure. This is the third piece to round out dungeons and settlements, and is also often neglected in games. I'll be posting a lot about my development of those rules in the coming months. Here are a few things I already know (I think):
The second one is a procedure for running mazes. This probably seems incredibly frivolous but I just want to have it. It'll be a specific variant of the dungeoncrawl so most of the same rules and guidelines apply (it'll be in active time), but having a way to abstract long, winding, deceptive hallways rarely, if ever, broken up by chambers is something that's experienced differently. I've written a post called "An Incomplete History of Mazes in RPGs" that has a lot of what you'll need to know about this, and some good foundations for what my procedure will end up looking like.
And if you thought that one was weird and stupid, the third one is an idea for a procedure I'm gunna call crises. This one will be in urgent time, making it compatible with combat and able to mix together. The idea is rules and resources for non-combat encounters that are nonetheless frantic and dangerous and complicated. I'm gunna be drawing on things like 4E Skill Challenge mechanic, Runehammer's timer challenges, escape rooms, game show challenges like Legends of the Hidden Temple and Survivor, and other collaborative puzzle/task-solving stuff. I like when my games are tense and exciting and get your blood running but combat isn't always the solution. I don't actually love violence all that much, and it introduces a lot more complications than trying to escape a burning building. I also imagine that it could be used for tense encounters involving monsters, but ones which are too powerful to really fight. More like a force of nature, you know? Like the encounters with the shark in Jaws.
Another thing I need to fill in: that blue column on page 3. Should I put an example of play there? Are there any other rules or explanations that are valuable up front, before even character creation? Dare I put art there and be inefficient?? Suggestions welcome.
A few other things I'd like to include: a sample dungeon, a sample hexcrawl, and a sample settlement. Too often I get frustrated with games that provide rules but no way of knowing how to use them. We need more small adventures to use, and we need to see an extended example of how the developers intend for you to use their content. I'll problably make a medium dungeon, a town settlement, and a single 24-mile area, and each will have their accompanying control panels in addition to maps and encounter tables and whatnot.
This is especially important because I'm designing specifically for open-world sandbox play, which is not the standard model used by most groups. If you use these rules to play vanilla, modern D&D then it'll be fine, but it won't be its best.
Also cool: in several places you'll find references to a book called the Enchiridion of Fates and Fortunes, the latest draft of which is also on the sidebar of this blog. Because I like my modularity and optional content so much, I am developing a supplement book that's just for expanding player customization options. Some people hate that but other people love it, so it seems that the best answer is to 1) make the game perfectly playable and fun without classes, but then also 2) make the optional classes fucking awesome and totally worth using.
Don't hold your breath on any of those other books mentioned just yet, but keep an eye on any content for the Enchiridion since I'm actively using it in all my playtesting for Brave.
For the first of the design notes posts, click here. Thanks for reading and, as always, I'd love feedback.
-Dwiz
Posted by Dwiz at 1:23 PM