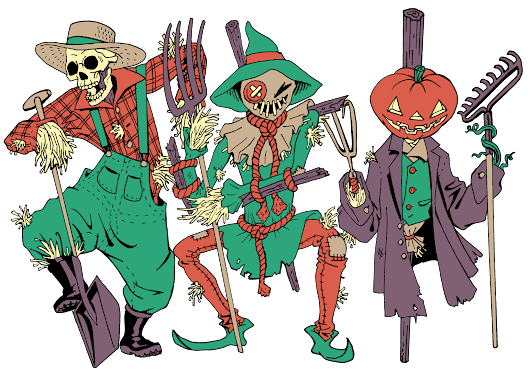 The final day of Halloween is less than a week away, so have another free Halloween-themed one shot adventure you can run before the end of the month. It took me a bit longer than expected, but this is the promised follow-up to my last Halloween adventure.

This scenario is built for use with a Lasers & Feelings hack called Tricks & Treats, created by Octava Oculta (Reddit username u/shardsofcrystal). It's an ultra-lite system fit for all ages or experience levels, and is great as a nostalgic little novelty adventure. Just follow that link, make a copy of the folder and its contents, and use the materials within to play a fun session of spooky adventure.

Here's the pitch: play as middle schoolers on a field trip to a pumpkin patch on the morning of Halloween, encounter a big horrifying monster that the grown-ups are helpless to stop, use your noggin to save the day. This is especially good if used as a sequel to the last adventure because all the students have aged a year and you can build on previous events and relationships. That said, most of my own players created new characters for this year, so do what you feel like.

Not sure when part 3 will come out, but one of my players suggested we also do some spooky adventures during tax season, the other Halloween. If anyone runs either of these adventures, I'd love to hear about it and how it goes. 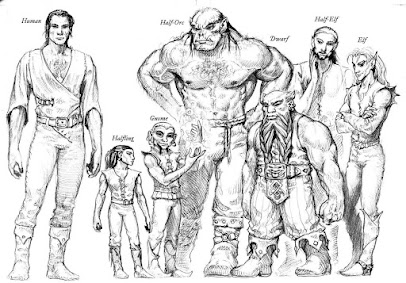 This is going to be a fraught post and I'm not sure I'll articulate everything I mean to clearly. That's not meant as a shield, it's just the truth. I'll try my best though. I know I have a very patient audience.

I mean, for one thing, we can start optimistically. There's lots of great fantasy fiction that's humans-only! A Song of Ice and Fire, Conan the Barbarian and most other Sword & Sorcery, Arthurian Mythology, most other real-world mythologies, most fairy tales and fairy tale-inspired fiction (e.g. Alice in Wonderland and Peter Pan and whatnot), most gothic fantasy/horror (e.g. Dracula), most pirate-y fiction, and so on. And others are human-centric to the point that things which may be called "dwarves" or "goblins" or whatever else are either clearly not societies or they're so peripheral to the action that "playing as one" wouldn't make much sense at all. Hellboy, Dark Souls, Darkest Dungeon, et cetera.

So if anything, it's really the default option, right? Elves and dwarves are the exception. Everyone should be asked to justify why they are including non-human player options, rather than me being asked why I'm not.

But here I am. I need to explain myself and it's going to be messy. If you're getting used to hearing arguments about orcs and dark elves a lot lately, this post is about that. I've been sitting on this post for a while now. This is going to take me a while to explain my line of thinking but please bear with me. There is a reason for each section in this post. 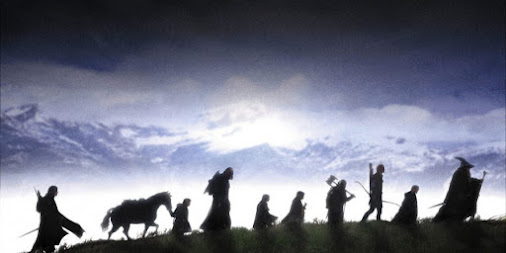 Because apparently this is a 5E blog now, I'm going to talk about the Gritty Realism variant rule suggested in the DMG on page 267. But wait! Don't go! You know me better than that. Of course I'll find a way to make it relevant to you and your rules-lite artpunk post apocalyptic furry heartbreaker as well, since I know you don't play D&D 5E.
So there's a type of adventure scenario I like to call a "Die Hard plot." It's not a good name, but it's what I always think of. In the movie Die Hard, the whole ordeal takes place within a single evening. The movie almost happens in real time! It's a really jam-packed day. See also:
...and plenty of others. Now of course, lots of movies take place entirely within 1 day. But these ones here are specifically all movies that are a great model for D&D ADVENTURE! Sure, My Dinner With Andre takes place in one day, but that's because it's just a dinner conversation. These movies are set within a single day in spite of how much crazy shit happens within them.
Every movie on that list is great (and 24 is okay I guess), and you should steal from them occasionally. But the main appeal of Gritty Realism is that it affirms a simple truth: you can't run an entire campaign of just Die Hard plots. Or rather, I think you probably shouldn't.
I'd like to talk about this at length and help us all to appreciate this better.
Read more »
Posted by Dwiz at 11:24 AM 6 comments:

Your game is just a bunch of levers. Everything in it, every single thing, is just a lever that your players pull. Your prep work going into a session is a list of levers you know are in your world and what you know will happen if they're pulled. During the session, you'll see your players pull some of those levers and the answers in your prep notes will be useful. You'll also watch them discover levers you didn't know are in your world. If they pull those levers, then the effect may be obvious. But more likely, it's a conveniently delayed effect. Delayed until the next session begins, when you've had some time to think about what happens when that lever is pulled.
You go into every session with a list of known levers and answers. Your Players discover more, you write them down and stall until the session is over, and then go into the next session with answers for those levers and some other new ones.
The game is just levers.
-Dwiz
Posted by Dwiz at 8:10 AM No comments: 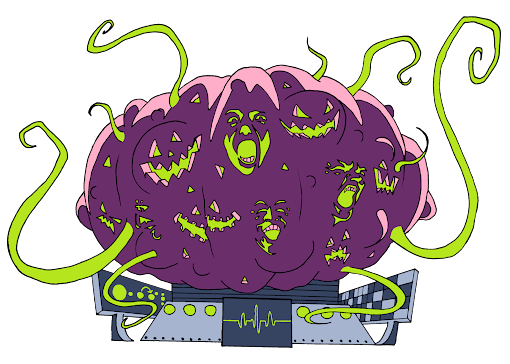 Happy first day of Halloween! Have a free Halloween-themed one shot adventure you can run this month, built for use with a Lasers & Feelings hack called Tricks & Treats, created by Octava Oculta (Reddit username u/shardsofcrystal). It's an ultra-lite system fit for all ages or experience levels, and I made a kick-ass adventure for it last year during lockdown. Just follow that link, make a copy of the folder and its contents, and use the materials within to play a fun session of spooky adventure.
Here's the pitch: play as middle schoolers going trick or treating in your typical North American suburban neighborhood, encounter a big horrifying monster that the grown-ups are helpless to stop, use your noggin to save the day. Stranger Things is a really useful touchstone here, because it's the perfect balance of family-friendly adventure and supernatural horror. Basically, I aimed for "more tense and easy to take seriously than The Goonies" but "less violent and mature than Stephen King's It." When the monster is present, it should feel legitimately threatening, but at the same time, you won't see it tear a 9 year old in two pieces and spray blood everywhere.
At least, that's how I run it. It's your table, do whatever you like. Maybe you and your group would prefer a game where the monsters violently massacre the neighborhood, but you also decide that you don't want your players to get called a homophobic slur by a shitty 12 year old. Use your grown up judgment on what's best for your group and what you want out of the game.
A note on audience: hypothetically, you could run this adventure for a group of kids about the same age as the protagonists. Pretty easily, in fact, since it's such a simple rule system and the scenario is easy to grasp. However, I personally feel like the ideal audience is actually a group of adults, since much of the appeal of the adventure is 1) nostalgia, and 2) being able to laugh at the cringiness of middle schoolers.
In a couple weeks I'll be releasing my sequel to this adventure, so if you enjoy this one then stay tuned so you can run another one before the end of the month.
-Dwiz
Posted by Dwiz at 9:34 AM No comments: