Female Fighters
Lady Lancers
Nonbinary Knights
I have a ton of folders of collected artwork for D&D inspiration. I was just thinking to myself that they could make for a good post. Why not start here?
I hope you like women in armor, because I have many digital binders full of 'em. This collection skews towards European knight aesthetics because I'm a hack. Feel free to correct that in the comments by contributing more pics.
I've tried to credit everyone. This isn't exhaustive or anything, these are just the pieces I've come across over the years that I enjoyed enough to save.
This one goes out to all the thirsty lesbians reading this blog. If it's popular then I'll do more of these posts (but with different subject matter).
Read more »
Posted by Dwiz at 1:33 AM 3 comments: 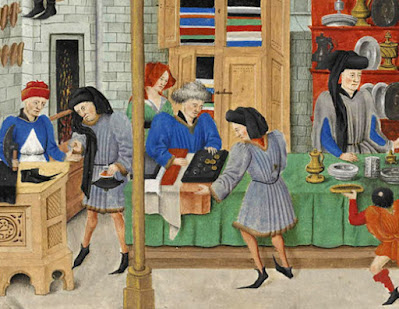 Continuing from part 2, I'm exploring some alternatives to the traditional role that money and economics plays in D&D, inspired by real-life situations found in history, with the occasional creative liberty taken here or there to make things more gameable. It's fantasy after all, we're not going to stress about accuracy here. Last time I just talked about small-to-medium adjustments to the existing economic situations your players engage in. This time I want to think bigger picture. In traditional, OSR, "XP for Gold" schemes, dungeoneering is a path that leads to domains being built up for each individual player. But what other campaign arcs shaped by treasure can we imagine?

An important caveat for this: all specific numbers and variables are intentionally left ambiguous. I wouldn't know the optimal figures or ratios for these ideas to work, especially with the pricing schemes written into your RPG of choice. All of these are simply described in the abstract. What I will say is that most of these schemes work better if you simplify capital into large blocks rather than penny-pinching. When you're a pirate crew raiding a merchant vessel, you'll win enough treasure to buy whatever mundane equipment you want. So the real measure of wealth is in big abstracted chunks that can use to buy ships and fortresses whole.

All of the following ideas would almost certainly need to be implemented and communicated to the players from the very beginning, as they're all meant to shape the entire campaign for everyone. In fact, I would encourage anyone out there to design a whole RPG or adventure scenario after your favorite examples here, since that's what these really are. The caravan-XP system from Ultraviolet Grasslands I described last time is a really good example of the sort of thing I'm here to offer you.