I have previously talked at length about the virtues of "campaign-level play." That is, rather than only ever running your game as a series of mostly-isolated scenarios in episodic fashion and then calling it a "campaign," you actually flesh out all the connective tissue between adventures. There are certain gameplay structures you can incorporate which aren't really interacted with on a scenario-to-scenario basis, but which nonetheless have an impact on the campaign as a whole. Examples I give are things like a calendar and downtime play, usable maps and travel gameplay, complicated NPC relationship charts that'll change over time, and of course, domain play and some slightly more in-depth economics than just a menu of regular adventuring gear.
Most of this post's contents will be schemes describing entire economies and how they function. There was a bit of that in Part 1, but it rarely extended beyond small communities. Everything here will be stuff that works at the scale of whole kingdoms, and oftentimes is most effective when contrasted against neighboring kingdoms which don't share these traits. If nothing else, it's decently educational for folks who find this stuff interesting and it's very often good worldbuilding fuel.
A common theme for these is new choices that players can make to acquire or use their rewards. The classic options are 1) go on an adventure where treasure is found, or 2) get paid treasure to go on an adventure. The former is self-directed, the latter is NPC-directed. Sometimes the DM will offer other avenues of gaining rewards though, like running a modest business in downtime, gambling, or swearing patronage to a demon lord in exchange for dark power. I think players should have a buffet of these options to indulge in at their own discretion. But to do that, you need novel options. Well this post expands that list and complicates a lot of what was already on it.
Read more »
Posted by Dwiz at 7:33 PM 5 comments: 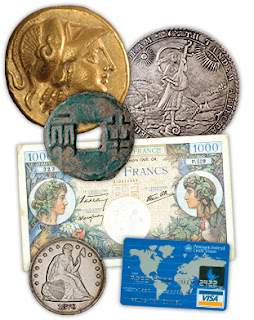 Much has been made of the weird underlying assumptions of general "liberal American capitalism" woven throughout mainstream D&D economics gameplay. It's called "anachronistic" by most and "great unique setting flavor" by the generous (usually in regards to Greyhawk or the implied setting of OD&D). It's an artifact of D&D's 1970s American Midwest origins and is, ultimately, probably useful for the same reasons that it was inevitable: it agrees with all the most common assumptions the general audience will have about economics going in. It makes the game more accessible and simple. Following from this is where we get "Gold for XP," a rule whose utilities I'm sure I don't need to expand on here.
But I like worldbuilding. I like when I learn new information and then get to use it as a DM. I also like when I learn new information and have to use it as a player. So "alternative economics" are inevitably going to interest me as a potential design space. The most common alternative that people explore when addressing D&D's inexplicable "industrialized free market" is to attempt to gamify feudalism or include provisions for bartering. I, too, will be addressing those in this series. But I'll be doing a lot more, as well.
Strap in.
Read more »
Posted by Dwiz at 10:53 AM 12 comments: