The Wizard and the Grimoire 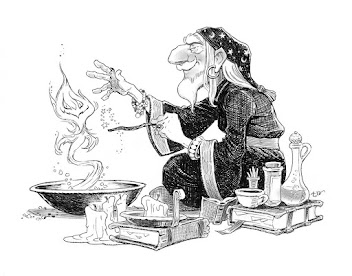 TL;DR: This post is about modifying the magic system in Knave (specifically how you acquire spells and what a "school" might mean under its rules) and it's about creating a Wizard class for my RPG Brave, which will probably not make much sense if you don't know anything about my game. But you should! So read about that here!

In every edition of D&D, you can gain the ability to cast spells of powerful magic. Nowadays, most classes are spellcasters. Back in ye olden times, there was "the Magic-User" class. They have always carried three assumptions:

But the system I'm using does not agree with those three basic assumptions. There's about a billion and a half ways to do magic systems in fantasy fiction gaming. One of my favorites in the system found in Ben Milton's Knave, which is one of many reasons it forms the basis of my own game. And out of all stuff I'm changing, this is one of the few things I want kept the same. I'll summarize:

So I am tasked with answering the following design prompt:

How do you mechanically create options for "improving" at spellcasting or somehow allow for a PC to "invest" in the magic system without breaking the current assumptions in place? 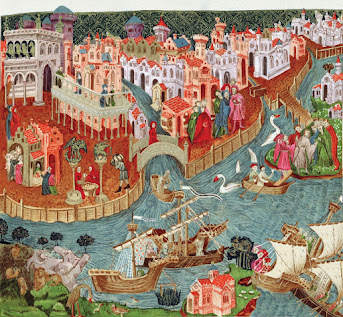 I've been sitting on this idea for a couple years now but I've only ever had an abstract conception of it. Now I have some concrete systems to apply it to. Sorta. This will build off of my previous post as well as various things I've talked about here and there throughout the blog.
It starts with the idea of "campaign qualities." See, most people have an idea of what handful of qualities they'd like to see characterize their campaign as a whole. "I want to play a game that makes me feel like a Greek demigod." "I want to play a game with serious acting and drama and consequences." "I want to play a low-magic game that's heavy on survival." That sort of thing. Some games are built entirely around achieving one playstyle. Other games are a bit more flexible, and can be played in different ways. Most of the time, people recommend you achieve your intended feel by way of smart Level Design, so that the rules don't need to be changed from what people are used to. "You play the horror genre in an RPG by making scary scenarios!" But sometimes all it takes is a tweak here or there to the rules and systems of Game Design to have major consequences. A very popular houserule for 5E D&D is the "gritty realism" variant described in the DMG (along with some tweaks people have suggested) in order to achieve a more slow-burn, resource-management focused game than the vanilla version. And apparently it works great!
One dichotomy I think has a great deal of potency is a concept I call "Unity or Division." Each of these has a broad definition that can affect a wide range of factors in gameplay, from economics to exploration to politics and more. They can be thought of as a template that you apply to an entire country, modifying the details of many rule systems to give it a distinct identity of gameplay.
Let's jump in.
Read more »
Posted by Dwiz at 8:55 AM No comments:

I've been getting some different ideas about how I might want to procedurally design open-world sandbox campaigns. Most people will just make a big hex map of varying terrains and then make a random encounter table for each terrain type, and that seems all well and good to me. But while I like monsters and wildlife and whatnot, I'm also deeply interested in people. Especially the relationship between people, power, and land. I dunno, I just like politics and political D&D. So to me, the most interesting things you can encounter while traveling between settlements would be stuff like garrison patrols of a paranoid leader, folks making a pilgrimage, wealthy merchants in a jam, that sort of thing.

Back when I used to watch Game of Thrones (when it was still pretty good), a huge chunk of the "non political" parts were plots about characters traveling over land, often through the wilderness. And yet, those plots almost always still involved the characters running into people and factions. Tyrion runs into Catelyn Stark and her retinue, then they run into wildlings or something, then the knights of the Vale, then he leaves and him and Bronn run into some hill folk, etc. Jaime and Brienne traveled in the wilderness and met bands of brigands and mercenaries, employed by lords with agendas. Arya traveled in the wilderness and met the Brotherhood Without Banners, the Hound, Lannister soldiers, some peasantry, a knight errant on a quest (Brienne), etc.

So I would still of course have monster encounters, but I've been thinking more and more about the logic to determine what sorts of people you'd meet and where. Here's what I've got so far:

A Thorough Look at Urban Gameplay in D&D

See, the title is like a Noah Caldwell-Gervais video. Get it? Because I'm about to spend a lot of words being pretentious but hopefully insightful.

I've spent a lot of time in the last year thinking about adventuring in cities. Part of it's because I really miss going outside and having an active life in an urban area. Part of it's because my D&D group spent the better part of 2020 in a campaign arc involving our party trapped in a hostile city, Escape From New York-style. And even when we broke from that for a few one-offs here and there, many of those involved adventure in the city. Or at least, like, in a town or neighborhood. And I've noticed what's worked and what hasn't and I've done so much darn reading and I want to get this right once and for all. I've run games in this setting with different approaches and sometimes it's good and sometimes it's not. And I've tried to give feedback to my own DMs about how they might want to improve those sessions, and sometimes they take that advice and sometimes they don't. But the worst thing of all is that each of the really solid sessions my group has spent playing in an urban setting have largely relied on the strength of completely unrelated elements, like a fun combat encounter, social encounter, puzzle, or whatever. They always just skirted around the problems of answering those vital questions about city adventures, so even if the session was successful it was at least partially just luck.

Here's a brief table of contents for this post:

If you just want the goodies, you can skip down to the 4th part.