This is one of the best ideas I've ever had and you should all steal it immediately.

Have you ever heard of the talking statues of Rome? I'd known about them for awhile, thought they were neat, maybe some potential worth exploring for worldbuilding purposes. Tucked it away in the back of my mind. Now, I've finally found a use for them.

Rumors are a classic thing to include in D&D. More so in the old school, but it's an ever-popular tradition. Lots of adventure modules come with them. But I've always found them tricky to integrate, myself. That's not the sort of things my players usually go for, and I'd hate to force-feed them stuff like that. But I'm working on a cool sandbox campaign, and suddenly having a system for "quest hooks up for grabs!" is really convenient.

And especially because we're all playing online now and I'd like the PCs to have an idea of their next adventure during the week between sessions ("downtime" in a sense), having a passive way to distribute this info, and consumed at their own pace, is the ideal.

So my city has a bunch of talking statues that my players can always look at. They update regularly, and the player characters can even post stuff themselves. There are 6 statues, each with a different theme, so there's a ton of variety. They have fantastic potential for worldbuilding, as the statues themselves and their theme embody a specific deity in my setting. In addition, not every post is tied to a quest. Lots of it's just flavor. A decent amount of it came about as a consequence of something the PCs did. That top-right post on my boi Tarscel up there? About vacated farms? Yeah, that all happened during our last session, and the PCs' next planned move was to start looting.

Want to know how to set this up in your game? I'll give instructions on how I did it, below. Adapt it however you need to fit your table's setup. I'll also show off my own statues a bit more if you want some inspiration. 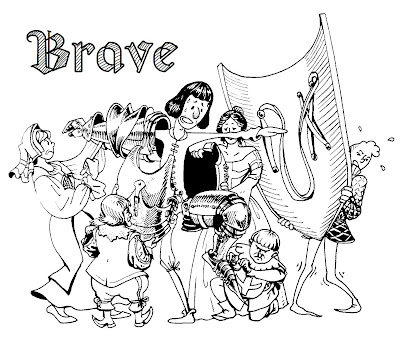 For our last session, I got to playtest my current draft of Brave. It was pretty successful. I don't normally care for "game tales" myself but I'll share some of the experience here since this was an incredibly valuable learning experience for me.

Firstly, here's a link to the playtest doc the PCs used. I modified a handful of things specifically for this session because certain features might not be "ready" for testing yet, but this is the first time I've had a chance to play with the actual classes.

Here's a map that the PCs used for the session. This is an area called the Wyvern Marches, with modest Marion at the center of all the chaos. Each location is 3 miles (1 hour, generally) apart. Here's the quick-and-dirty 3-step travel procedure I used: