Here is a link to my custom mod for Ben Milton's minimalist RPG, Knave. [Edit] I've also now included the word document version. You can download this and then edit the text directly. It looks like if you don't have the fonts Ben picked out installed, you'll want those so the formatting is retained (Sebaldus-Gotisch and Crimson Text)
Just like the original, I recommend you print it out. Still just 7 pages, not too many changes. I anticipate editing it even more eventually, but this right here is the result of a fair amount of playtesting and changing what would work better for the folks I've played with.

The beginning lists the major additions, which include an adapted Death and Dismemberment ruleset, Patrick's Starvation rules from Veins of the Earth, my own Advanced Darkness, and then my own system for making leveling up a little bit more interesting. I also based healing rate on current level since every player I've had thought it was weird that you seem to get "worse" at healing the more experienced you are.

To make room for these, I took out all of the designer's notes. They were one of the best parts of the original Knave but if you're reading my version then you're probably already familiar with all of Ben's design choices.

I also changed a number of miscellaneous phrasing matters and small rules that, you may notice, bring the game slightly closer to 5E D&D than it was. Movement speed is 30'/round, an opposed check consists of both parties rolling, an attack roll must be greater than or equal to their Armor, renaming saving throws to Die Checks, etc. These help me and most of my players smooth over the transition between the two RPGs, especially since we usually go back and forth between them. One of the most annoying little hiccups in the game's flow is when someone accidentally makes reference to another game's terminology and then someone at the table who's never played that game says, "wait, what?" When 5E came out I kept accidentally saying "roll a Reflex/Fortitude/Will save" and my brand new players would get confused. It also means that all those passive little details in the rules that I'm really familiar with from 5E aren't wasted when switching to Knave for an evening.

The main reason I named this "Brave" is because, between Death and Dismemberment and my leveling system, this typically makes PCs much more powerful than in regular Knave. I mean, they're still just pathetic murder hobos compared to any D&D character, but it's all relative. 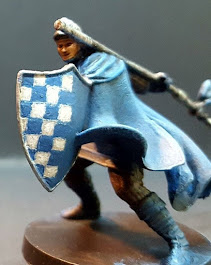 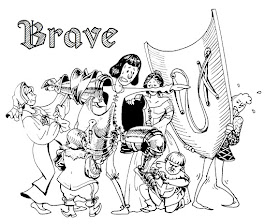