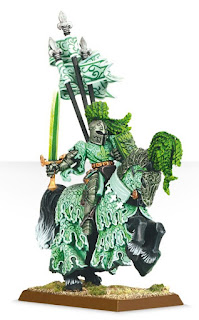 This is another one that's more just about fantasy fiction in general, not specific to RPGs. Take it or leave it.
I'm not going to try to claim there's some brilliant and noble reason why this is a good or effective writing tool. I think it's just a lizard brain thing somehow. But let's say you're writing a work of fiction. Maybe some fantasy worldbuilding stuff, maybe not. But you need to impart some ideas and you want them to really resonate with the audience. Isn't it weird that one of the most reliable ways to do this is to just, like, reference an older, familiar work that talked about the same thing?
The older and more familiar the work, the better (generally). But not just personally familiar to the audience. It has to have been ingrained into culture. The number one culprit in Western culture is the Bible, followed by (I think) Shakespeare. Like, do you have any idea how many political speechwriters in the last 200 years just borrowed language directly from those two sources as cheap spice? Or how many authors named their work based on a quote from those two? Some examples:
The Bible
Ol' Billy Shakespeare
I don't know about you, but this trick really just does it for me. Those are some good-ass book/movie titles. And many of them are also really good books/movies, so you know the writer knows what they're doing!
It goes beyond this though. Recalling specific images, names, and narratives from these sources is also a literary device that just... works way better than it by any rights should. I remember when the 5E adventure Storm King's Thunder was announced, I got super excited because it was sold as, "a retelling of King Lear, but with storm giants" and I thought that was the fucking coolest sounding thing ever. In hindsight, is that really all that brilliant? I don't know but fuck it. It doesn't have to be full-on adaptations like West Side Story or The Lion King or anything. Just, like, short references oftentimes have a bigger impact on me than something more original. I said in my post about Arthurian mythology how it will always be more powerful to put the Holy Grail into your D&D game than to try to put in something like "The Cup of Pelor." Well aside from being another good example, this also brings into the conversation specific mythological references as another source of potent allusions. For some reason, Neon Genesis Evangelion and The Matrix are both improved by their weird Biblical references even if, all of us being honest here, they're kinda shallow as far as "symbolism" goes. Whenever a spaceship is named something like "Olympus" or "The Argo" instead of something generic, it tickles that spot.
So far, no big revelations I think. But I ask you: are we ready for Tolkien references to have the same impact that Shakespeare and the Bible has? I'm serious, have we reached that point yet? Sometimes I kinda feel like we have. I mean, the phrase "not all who wander are lost" from the Riddle of Strider is already really common and familiar and shows up in very non-Middle-Earth-y contexts. Would it be weird if a presidential candidate quoted or paraphrased Gandalf or Faramir or someone in a speech?

"Many that live deserve death. Some that die deserve life. Can you give it to them? Do not be too eager to deal out death in judgement. Even the very wise cannot see all ends.”

"I do not love the bright sword for its sharpness, nor the arrow for its swiftness, nor the warrior for his glory. I love only that which they defend."

"I wish it need not have happened in our time. So do all who live to see such times. But that is not for them to decide. All we have to decide is what to do with the time that is given us.”

If used right, I kinda feel like it works as well as a well-chosen Bible quote.

But it goes beyond merely references. I'm thinking about the ways in which we draw from the Bible and Shakespeare within our collective mythologies and imagination. See, there's a difference between merely making a reference to something versus using something as an archetype. When Futurama parodies Lord of the Rings in Bender's Game, that's just an elaborate reference. It's on the nose. But when Led Zeppelin mentions "ring wraiths" and the "Misty Mountain," that's not merely them singing a song that's meant to be about Middle Earth. It's repurposing elements of Middle Earth for a new fantasy tale. You can tell it's not actually about LotR because alongside those lyrics it's also singing about fresh ideas, like the Dragon of Darkness or the Angels of Avalon. It's just like how in your D&D game you might include the Devil or Cthulhu or the Baba Yaga, totally divorced from their original context but instead recontextualized beyond that. At some point, I feel like it would make as much sense to include Smaug or Galadriel by name (if a bit reimagined) as it does to include Oberon and Titania in your Feywild or the biblical Leviathan or maybe the demon Mephistopheles. They can transcend their original work and become a myth.
I say all this because I, like many fantasy worldbuilders, am already in the habit of stealing from my favorite mythologies and folklores as I desire. How many people's campaign setting just straight up has Yggdrasil in it, or the Wild Hunt, or the River Styx? It's this same reason that I named the "spell schools" in Brave 1.9 the way I did. The 48 spells are divided into 6 groups, named: Hermes' Arts, Circe's Hexes, Hildegard's Rhymes, St. Aquinas' Prayers, Dr. Faust's Blasphemies, and Merlin's Charms. The idea is to have a little bit of worldbuilding written into the rules, implying a setting in which these 6 figures coexisted as powerful wizards at some point in the past. I try to sneak it in lots of places. The Ranger class used to have access to "Moonlight Arrows," but those were renamed to "Diana's Arrows" and it instantly seemed cooler to my ranger players just for that small bit of worldbuilding relying on the familiar.
One of my favorite examples of this being done in another fantasy work is Bretonnia from old Warhammer Fantasy. It's a smoothie of lots of elements, symbols, and words borrowed from throughout Arthurian mythology for the purpose of setting a familiar tone, but without any real resemblence to the original context when you look closely. They have a goddess called "the Lady of the Lake" who is served not by priests, but instead by "Grail Knights" (essentially their clerics/paladins) and "Grail Damsels" (an order of young witches). She has an artifact that, yes, is called "the Holy Grail," but has nothing to do with Jesus Christ. Rather, it's her own magic cup that she allows the worthy to drink from to draw powers, the ultimate symbol-of-and-reward-for chivalric virtue. There's a legendary figure called "the green knight" but he's more analogous to "The Once and Future King" himself than the green knight of Sir Gawain fame, arguably with a bit of Lancelot mixed in.
But how old does something have to be in order for this type of "repurposing" to work? Cthulhu really wasn't created all that long ago. Much of my own setting actually began with stealing pop culture elements from the world of music. Partly because I'm an unoriginal hack who's bad at coming up with names and partly because it's a fun setting gimmick I enjoy.
It's easy to start with little references like "Bald Mountain," Tchaikovsky's "Nutcracker," and the hidden village of "Brigadoon." I've taken it a bit further than most, though. The thing that started this was a mixture of Led Zeppelin's fantasy setting, Queen II's fantasy setting, and In the Court of the Crimson King's fantasy setting, all made into one D&D world. The lands of the overworld revolve around the Seven Seas of Rhye, where a war breaks out between the White Queen of Light in her Castle Evermore versus the Black Queen and her Crimson King commanding the Dragon of Darkness, with characters like the Fairy-Feller, Arch-Magician, and Fire Witch as major NPCs in the middle. It writes itself, right?
I have a document tracking all the dumb references I've used to fill out my setting so far. As you might expect, you'll find some David Bowie, Bob Dylan, Emerson, Lake, and Palmer, etc. on there. It's like Jojo's Bizarre Adventure except less goofy and jokey. Also, before anyone suggests it: no Styx.
So yeah, that's my cheap fantasy writing hack I'm squeezing dry.
-Dwiz
Posted by Dwiz at 10:04 AM