The New School, the Old School, and 5th Edition D&D

People have short memories.
Actually, that's only part of it. People also need tribalism, and tribalism needs enemies. Also, lots of people are new to the hobby, so maybe they genuinely don't know.
I frequent a lot of OSR spaces online, and while it's far from a consensus, one of the most pervasive sentiments among this community is that 5E D&D is the devil. It's representative of all things we old schoolers hate in gaming, and is the ultimate metric to contrast one's own game against if you want to appeal to this crowd. At this point, "5E" has literally become shorthand for "new school" in, seemingly, most old schoolers' vocabularies.
Which is funny, because I was there when 5E came out in 2014, and at the time it was being called "old school." It was a "return to form" for the franchise. "The legacy edition." A victory for the OSR, who had finally conquered the mainstream. It pulled back many of the trends of 3rd and 4th edition D&D and abandoned the way of the new school in favor of trends that had been started by the grognards years before. It openly embraced many of the specific Zen moments from Matt Finch's A Quick Primer for Old School Gaming. Zak S, who got credited in the book as a consultant, went parading around GenCon with his entourage wearing shirts saying "Zak S saved D&D."
Don't believe me? Behold, some archaeology:
"D&D 5E is the Old School-iest D&D Since Old School D&D"
In fact, many people even back then derided 5E for being too old school. I remember people calling it a "nostalgia grab" and that it was "playing it safe" by regressing to an older philosophy of gaming.
The first system I learned and got into was 4E D&D, then 1E Pathfinder, then Star Wars Saga Edition, and then 5E D&D. And while those first few system transitions were pretty rough, switching to 5E D&D was the easiest fucking choice I've ever made in my life. It addressed every single problem I had with running Pathfinder.
Here are some common qualities of 5E that people point to as being emblematic of the old school:
I suspect that many of those in the OSR who casually refer to 5E as shorthand for "new school" are actually aware of everything I've just said, but they're lazy and an inaccurate-but-commonly-recognized shorthand is convenient. But I've never given into this. There are many reasons to not like 5E or not want to play it, but whenever someone in the old school scene refers to it as "maximum crunch" or "obsessed with character creation" or "fixated on balance," it's hilariously revealing just how much they live in a bubble. I pray for your sake you never encounter a rulebook for Fantasy Craft or Exalted or Eclipse Phase.
I also frequent some 5E spaces on the internet, such as the r/dndnext subreddit. You know what they talk about there? Every single day it's just bitching and moaning about how simple and streamlined and unbalanced and loose 5E is. How they wish it were more like Pathfinder or 4E D&D. Many of them wish the action economy were more restricted and complicated and inconvenient, somehow.
Of course, this is also all very misleading. I don't actually think that 5E is an OSR game. At least as often, it's been called the "Goldilocks edition," which I find to be a much more accurate title. For every supposed old school trait it has, it definitely has a strong new school trait.
I mentioned Matt Finch's OSR primer a few times. Well, in the time since 5E came out, a new OSR primer was written by an assembly of prominent thinkers in this space who thought it needed replaced with newer, better wisdom. The Principia Apocrypha contains a lot of advice for old school gaming that neither complements nor clashes with 5E in most regards, and is more about how the DM runs a ruleset than about the rules themselves. But it does open with a definition of the OSR given by Ben Milton, phrased thusly:

The more of the following a campaign has, the more old school it is: high lethality, an open world, a lack of pre-written plot, an emphasis on creative problem solving, an exploration-centered reward system (usually XP for treasure), a disregard for "encounter balance", and the use of random tables to generate world elements that surprise both players and referees. Also, a strong do-it-yourself attitude and a willingness to share your work and use the creativity of others in your game.

And that definitely does seem pretty antithetical to 5E's innate game design, or at least the design of many of its adventure modules. I wonder if this is indicative of a general backlash to 5E specifically. Like the definition of OSR changed in response to 5E's popularity, with old schoolers needing to stop focusing on their favorite stuff that 5E got right and start focusing on new complaints that they can still levy at "modern D&D." That said, I also think Ben hits the nail on the head. Those things are crucial to old school design, and I can speak from experience in saying that it's really hard to twist 5E into achieving those things to my satisfaction.
At this point I should probably attempt the damn-fool task of defining these things
I sincerely cannot estimate just how many blog posts, forum threads, Discord conversations, YouTube videos, and essays I've consumed which attempt to define "old school" and "new school" in RPGs. Normally, if I were going to write this sort of thing then I'd follow my usual method of intensive research for a few days or weeks and compile all the major (and many minor) examples of this task having been attempted. But I really don't feel like that's worth the effort, especially since I'm sure that most of my audience has also already been through this conversation a million times before. So I'll try to summarize stuff and politely ask that people don't be too nitpicky about it:
Trends of old school design (starting by plundering the stuff I already wrote/copied in this article up to this point):
Trends of new school design (mostly focusing on specifically mainstream games like modern D&D, CoC, WoD, etc. instead of indie games made in the last 20 years):
Notice that 5E D&D matches many traits on both of these lists but neither of them completely.
A few additional things to note here:
So, you know, to a certain extent it's all bullshit. But I know I haven't lost you yet.
Here's the part where I triple the number of arguments that break out in response to this post
I made a shitty graph. This is a rough chart of how old school vs. new school each edition of D&D has been, following the criteria described above. Have fun fighting over this thing: 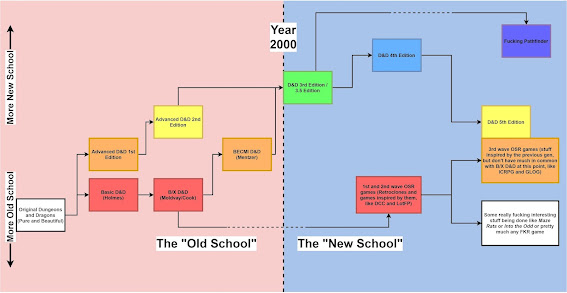 Like I said before, it's not actually a spectrum. But if it were, I think we could credibly argue that it would look a lot like this. And I also firmly believe that 5E D&D is pretty much right in the middle, perfectly described as "moderate crunch." Of course, it would appear as though nobody on Earth would ever actually be satisfied with a "Goldilocks edition" of the game, since people fight about why 5E should be more OSR or more Pathfinder-ish. However, I think this is actually just two vocal minorities. There's a reason 5E D&D is the most popular thing in the entire goddamn universe.
Part of it's brand recognition, but all previous editions had that too. Part of it's the internet and the rise of nerd culture, but those were in the equation since at least 3E. Part of it was the luck of getting free advertising through Stranger Things and Critical Roll, but the explosion of 5E D&D's popularity solidly predates those two things. I really think we need to credit most of 5E's popularity to it achieving a balance of gaming philosophies that legitimately appeals to most gamers, and those of us who skew more heavily to one side or the other just have to accept that our preferences are kinda weird. It's not actually as though OSR could become the mainstream if only we did better as a community to build our reputation and spread the good word and all that. It's just not as naturally appealing as the Goldilocks philosophy, nor is... whatever the hell those Pathfinder players are up to.
Matt Colville once made a tweet essentially asking what 5E D&D is good at, because the answer isn't really obvious. I think this is because its design isn't really an outlier in any direction, so it can't be held up as a really good example of some specific playstyle. But that's what it's good at. It can appeal to lots of playstyles and is very flexible. I think a lot of people forget that most gaming tables are comprised of players with varying preferences. I may be an OSR-leaning player, but that doesn't mean the rest of my party is. One of them really likes GURPS and World of Darkness, one of them likes Lancer, one of them does play-by-post social RP, one of them just spends hours every weekend making new 5E characters just for the pure joy of it, and so on. We need a game that can address all of our preferences.
I also mentioned earlier that tribalism is playing into misconceptions present here. RPGs are a relatively small hobby compared to other forms of entertainment. In a sense, all RPGs are "indie." But even within our little bubble, we still managed to construct the "mainstream, commercial, trend-setting, powerhouse" villain in WotC and D&D. And everyone else in the hobby needs to define themselves against that character we've constructed, because it makes them sound more legit. Most of the games that get labeled Indie, DIY, "Artpunk," and so on should really be considered part of at least 4 or 5 different design philosophies. But instead, they all choose to lump themselves into the camp that is basically just defined as "not D&D" because that, by itself, has perceived value.
And I'm sorry y'all, but 5E D&D just doesn't actually fit the picture of our desired villain very well. Once upon a time we could bitch and moan about 4E, but then the developers listened to community feedback and made a game that should and does please most players instead. You still may not like 5E, and you probably have very good reasons for that, but it's not the pinnacle of new school design it's often made out to be by people who just want a strawman to contrast their game against. And, incidentally, if any new schoolers are reading this post, then the same argument goes for why 5E is not actually old school.
I am on record as saying that D&D 5E might be my favorite RPG, and I think anyone reading my blog would know that I've played a lot of RPGs. Even the one I'm currently making has very little in common with 5E, so the fact that I still think so highly of it says something.
-Dwiz
Posted by Dwiz at 1:31 PM